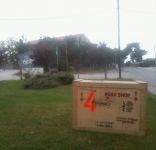 in collaboration with the Action Field Kodra (Municipality of Kalamaria)

The Thessaloniki Biennale is an institution that has focused for a number of years on the rich and always tumultuous Mediterranean region. We chose to investigate the cultural and individual stereotypes about this region, which are largely responsible for building the myth surrounding the Mediterranean. What prompted this interest on the Mediterranean now? Could the idea of a large and cohesive Mediterranean culture be serving the interests of cultural imperialism? Could this unified approach that focuses on similarities prevent us from identifying and productively reflecting on the differences?

The strategic choices involved in all similar artistic events are made at the political level, take a cultural form and should be ideologically examined in order to be able to have a clear picture of where we stand and what defines our identity –especially in light of the fact that, during the previous decade, the new citizen was defined as a person belonging to a global, or at least globalized, community.

Inevitably, we had to reflect on the nature of geographical categories that define the cultural present, on the facts that are shaped by the micro- and macro-historical processes within this framework in order to get an idea of how the future of Mediterranean culture is shaped. This led us to the familiar stereotype of the citizen and inhabitant of the Mediterranean, of the Mediterranean temperament – an idea that contains many truths, but is also ripe with myths. Temperament is defined as the unique personality, the idiosyncrasy of an individual; the term can also be used in a broader sense, however, to characterize entire nations and states. Clearly, differentiating the Mediterranean peoples from other nations based on their supposed unique temperament is groundless; it is certainly true, however, that each place does have unique elements and concepts that connect the different peoples of a wider area, such as the Mediterranean. This matter was extensively debated during the workshop.

We asked from the ten participating young artists and the two professors who worked with them to approach these common concepts. To try and identify what this human geography means for their own lives and identities, artistic or otherwise. All participants, each following his or her own path, gave satisfying answers, both individually and collectively. We decided that our own theoretical and practical role should be to provide helpful but discreet guidance to the artists.

For a period of two weeks, we shared an old army barracks near the sea, working in an old building. We had endless discussions that left us exhausted but also exhilarated. We mocked the stereotypes but also acknowledged the fact that we are trapped inside them, often unconsciously.  We attended screenings and lectures, we learned, or we selectively forgot.

We had the honor to become closely familiar with each artist's methods and thinking. We came to know each other; we questioned, changed our minds, confirmed a lot: ways of thought, possibilities, needs, narcissisms and self-doubts, all kinds of technical and conceptual problems. The things that inspired the discussions and work of the participating artists included the concepts of land, birth, family, the sea, salt, dreams, extremities and deities.

This exhibition represents the end result and visualization of this process. It perfectly reflects everything that led up to it, the sum total of the workshop experience. These are the individual – and essentially collective – contributions by each and every artist in this project.