Theodoros Zafeiropoulos. Quest of Query. Interpretations of the Actual 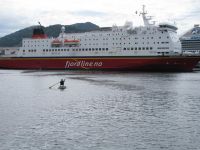 The port of Thessaloniki has remarkable similarities to that of Bergen in Norway, a fact that makes the Center of Contemporary Art of the State Museum of Contemporary Art, at Warehouse B1, port of Thessaloniki an ideal new destination for the project entitled Quest of Query: Interpretations of the Actual by Theodoros Zafeiropoulos. The exhibtion is on view from January 23 to March 7, 2015 (opening: Friday, January 23, 20:30. Opening days/hours: Tuesday to Saturday 10:00-18:00).
The exhibition is accompanied by educational programs and guided tours throughout its duration, as well as a symposium on January 24, 2015, at Warehouse B1, including presentations by curators, art theorists, students, and art professionals from Greece and abroad.

The exhibition includes a series of forty drawings and four video installations based on documentary materials taken in various locations in Norway. It is the synthesis of the first two exhibition chapters of the project that were initially presented in Budapest, at tranzit.hu and the Deák Erika Gallery, in June 2014. The wandering (allegorical as well as literal) in natural and urban habitats, the “foreign” experiences, and the observations, appear through collective narratives and personal accounts.

The project Quest of Query is an ongoing, mutual collaboration between the visual artist Theodoros Zafeiropoulos (GR) and the curator Eszter Szakács (HU). Bergen, Norway—the city where they both participated in residency programs, in AiR USF and Hordaland Kunstsenter—is the point of departure for the project in which the materials (photos, videos, objects) taken and collected there are continuously re-interpreted with different areas of theoretical research. With each exhibition chapter, the artworks form new parts of an “expanded archive” that revolves around the notions of place and topography, rather than time and history.

The two core ideas, “quest” and “query” are etymologically related words; they both originate from the Latin quaerere (to ask, to seek). The project’s basic methodology is to explore and probe various concepts—such as political engagement, ecology, and anthropology—through the representation of the surroundings.

The artworks present a series of recorded observations of landscapes, bodies, and architecture from the area of the Norwegian city. These intuitive anthropological images, however, are constructed and bricolaged into ambiguous interpretations. The close contemplation and reading of the narration created from the site-specific, obvious, and alluring details of both natural and urban environments, elicits the invisible socio-political components (such as surveillance, propaganda, or control) to appear beyond the local level. It is the journey from “topos as place” to “topos as common-place,” a metaphor for social and political imprints.

Place and topography in Quest of Query are trans-local and poetic: they form observations and an odyssey not in physical space and time, but as a continuous intellectual journey that decodes invisible yet existing globalized contradictions.

11:40–12:00
Anthea Buys (NO), director, Hordaland Kunstsenter, Bergen, Norway
“As Real as Any Work of Art:” The (Ab)uses of ”Reality” in Critical Artistic Practice

13:30–13.50
Maria Kotridou, Maria Ralli, and Olga Dimitra Tsialou (GR), undergraduate students at the Department of English Language and Literature, Aristotle University of Thessaloniki, Greece
[Meta]fact and [Meta]fiction: The Case of the Interpretations of the Actual Symposium

13:50–14:10
Alexandros Kioupkiolis (GR), Political Theorist, lecturer at the School of Political Sciences, Aristotle University of Thessaloniki, Greece
Post-Political Authoritarian Exception Behind the Liberal-Democratic Ordinariness: The Case of Greece from the Early 21st Century to the Regime Crisis in 2010-2014

Born in 1978. He graduated with honors from the School of Fine Arts, Aristotle University of Thessaloniki (2003). He participated in the Erasmus program in the University of Barcelona (2001). He graduated with honors from the MFA program of the School of Fine Arts in Athens (2006).
He graduated and was honored with the Paula Rhodes Memorial Award from the MFA program of the School of Visual Arts, New York, USA as recipient of the Fulbright, Gerondelis and Al.Onassis Foundations scholarships (2009). He participated in the Skowhegan School of Painting and Sculpture (2009).
He is a current PhD candidate in the School of Architecture, University of Thessaly.
Since 2001 he has presented 7 solo shows and has participated in more than 50 international group shows, residencies, and projects in Greece, USA, and elsewhere.
He received commissions to create site-specific installations in many institutions and Foundations including the Morton Arboretum in Lisle Illinois, USA, the Museum of Civil Aviation in Athens, and many more.
His artworks are part of many public and private collections in Greece, Switzerland, London, USA, and elsewhere. Articles and reviews of his works have been published in many Greek and international magazines, newspapers, and web-media.
In 2013 he was resident artist in the Flux Factory in NYC and the USF residency program in Bergen, Norway.
In 2013 he was selected to represent Greece in the 16th Biennale of European and Mediterranean Young Artists entitled Errors Allowed, in Ancona, Italy.
In 2014 he participated in the Photo Biennale of the Thessaloniki Museum of Photography.
He lives and works in Athens and NYC.
www.theodoroszafeiropoulos.com