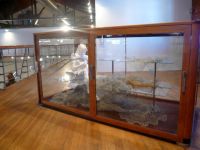 Tradition and reversal as elements of artistic reflection and creation form the core of the new exhibition presented by the State Museum of Contemporary Art in the Main Program of the 4th Thessaloniki Biennale of Contemporary Art.

The exhibition "Tradition-Reversal" opens on Wednesday, Sept. 18, at Warehouse B1, in the port of Thessaloniki. A selection of works - paintings and sculptures, installations, photographs and projections- made by 29 Greek and foreign artists, will go on view.

Common 'ground' in most of the artists participating in the exhibition is the Mediterranean: Tradition and reversal are structural components of the “idiosyncrasy” of the Mediterranean, which has such a rich cultural and intellectual heritage; a region that is diverse, unique and full of contradictions, numerous convergences and divergences,   a crossroad between East and West. “Today, it is hard to think of any other part of the world troubled by so many conflicts and upheavals. The Mediterranean is “burning” over and over again, afflicted by wars, social and political turmoil, the redrawing of borders and value systems, economic crises and regime change. From Gibraltar to the Gaza Strip and Cyprus, and from Greece and Albania to Egypt and Tunisia, the Mediterranean is a volatile region, where history is rewritten and art is redefined”, note Katerina Koskina and Yiannis Bolis, curators of the exhibition.

The works selected for the exhibition Tradition - Reversal of the State Museum of Contemporary Art belong to artists who have focused on discovering and recapturing the dynamic and fundamental function of art; employing this function, they make a statement about the difficult position of contemporary man, who seems to be, more than ever before, in need of constants and a safe haven, as he lives in this crucial and volatile historical juncture, which is characterized by an often enforced break with his values and roots. Contemporary artists, no matter how much they have lost their bearings amidst numerous ambiguous and contradictory views, listen attentively to the changes and transformations, often identifying them before they have become clearly visible. They then react to those transformations and express themselves in ways that demonstrate the new face and role of the arts.

The exhibition presents works that have been recently added to the permanent collections of the State Museum of Contemporary Art. Some were bought by the Museum, others were donated and some are on loan. The works  are combined to shed light, by their forms, norms, documents and memories they evoke, to the Mediterranean, a shared place of origin, a point of reference and, today, the field of intense, dramatic and powerful upheavals and transformations. The curators of the exhibition wanted to investigate, through an exhibition consisting of works that were not created ad hoc or on the basis of a predetermined exhibition theme, the existence of a common idiom rooted in common references, origins, actions and beliefs, which takes the form of a language that may allude to a common identity or even perhaps a shared destiny.

The center-stage of the exhibition is devoted to the latest work created by Nikos Alexiou, a composition that has never been presented to the public before. The exhibition is a tribute to Alexiou, in whose work the notions of tradition and reversal have a prominent place, serving as a major theme for his artistic investigation. The idiom of Alexiou’s work stands out for its sensitivity and its poetic, innovative and authentic character.

Through the works presented at the exhibition Tradition - Reversal, art aspires to offer its own extroverted answer, to inspire the reversal of the status quo, to deplore the ills of today’s world, to suggest new ideas and attitudes, and to raise public awareness. Art makes its presence felt by invoking timeless myths, the pursuit of symbols, the ties with the past, the mourning that follows moral and material loss, the dead, the immigrants, the muzzled intellectuals, the passive or outraged citizens, the destructions and extinctions of all kinds.

*The works of Nikos Charalampides, entitled ‘White and red flag. Homage to Vasso K’., are presented at the Teloglion Foundation of Arts-AUTh because of their relevance to the exhibition Vasso Katraki: In black and white.